A Refresher on How to Use World Globes 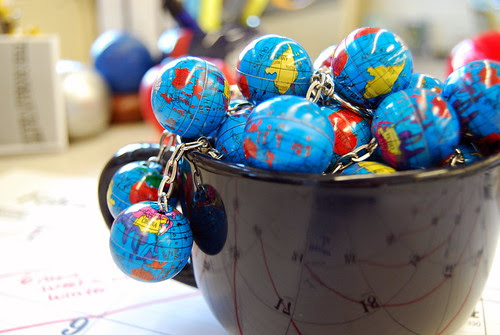 First, you should know the limitations of globes.... these are pretty obvious:


Reading a globe between the lines

To find a place on an educational globe you need the two kinds of 'lifelines' drawn on it: the Latitude and Longitude lines.

Latitude lines go alongside (parallel to) the equator, which circles the middle of the globe between poles (the poles mark the apparent 'axle' on which the earth turns). The equator itself is a line of latitude.

Lines that go from pole to pole (North to South, or up and down if you like) are lines of longitude. They are also called meridians. Unlike latitude lines, which have the equator as a starting point, there is no natural place to start as 'zero' longitude line. For centuries different countries used different longitude lines, sometimes going through their own places, as zero meridian to establish their own primacy – hence 'prime' meridian. Nowadays globes have the Greenwich Meridian as the prime meridian (France stuck to the Paris Meridian for decades after the International Meridian Conference).

Adding to the confusion is the assigning of latitude and longitude numbers (coordinates) to places, because the intersection of two lines is not an area like a real latitude or longitude, or a real place – it is a point. This doesn't bother people though.

To locate a place on a globe, all you have to do is to:
And then look up the place name on the globe. Tough luck if your globe doesn't have it.

Most of the time people don't bother with the numbers. To find a known place on the globe you need coordinates. But to discover places on a globe, people just look at its surface and do their own exploring and then they find the place, remember the shape (or color if there is) and general location of the country (up or down, east or west of a big ocean or continent). In general, people won't have problems locating that country again in the globe, even without coordinates – unless they have trouble remembering things.

For those hankering for nostalgia (late 60s to 70s), how many of you remember the old booklet on How We Use Maps and Globes? Globes and maps were simpler then.

In the Digital Age, discovering places on a globe has been made more interesting with children's globes that talk and give out helpful information about a place:


You may be delighted to know that, nowadays, it is possible for a globe to know too much: