Why do many people have globes in their office? 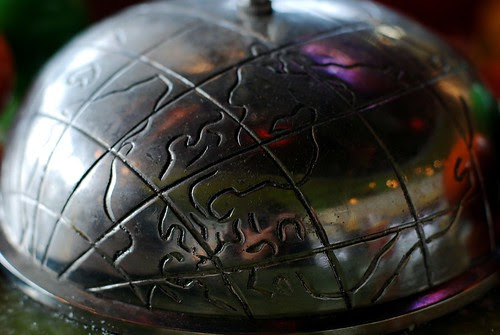 The most common answer seems to be "for hiding something." For instance, the only answer in the Quora page asking the same question is that it enables the office workers to hide their stock of rum. Indeed, Googling for "hidden in the globe" will give you an entry for world globe hidden bars near the top results.
And, in the 2011 3D-animated Spielberg adaptation of "The Adventures of Tintin," a globe was used to hide part of The Unicorn's treasure.

Of course there's more to globes than being hiding places. Globes were first intended to model the earth. In fact, world globes are more accurate than world maps because globes are spherical like the earth. As such, any straight distance on a globe between two points joined by a thread is a great circle route — used by planes or ships unless land masses, ocean currents, or trade winds either hinder or help the voyage. Paths along great circles appear straight on a globe, but curved on a flat map.
If you are a Muslim, you can better determine the qibla (the direction to face when praying) if you're using a globe than a map. [Computer and mobile phone programs linked to GPS satellites are even more accurate].
There's really nothing like holding a real globe in your hands. Google Earth may be more high-tech but the 'high-touch' of holding a world globe is incomparable and has inspired heroic journeys and discoveries (see Alex Chacón's Cross-Americas journey on a motorcyle for a more modern globe-inspired travel). 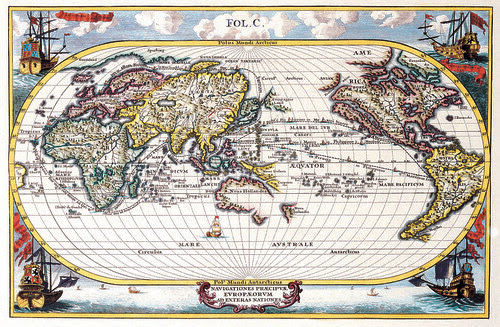 Some of those feats were terrible, but still great. Globes have inspired conquests — globes have helped western colonizers obtain and get a grasp of their far-flung empires. A similar function is played by globes in modern corporate offices; they remind people of the global reach of their corporations and their brand — which also imparts a sense of pride and elation, if the company is doing well.
Globes are great learning tools for children. They also aid people in plotting their future travels or remembering their past adventures.
Globes truly inspire the imagination in a way no flat maps can do. And so globes are here to stay — and will continue to have a 'globe-al' demand.
Posted by Walker at 6:00:00 AM